The Bat Cave, or The Pit of Despair, Take Your Pick

Over a week ago now, while cleaning what was once upon a time my mother-in-law’s kitchen—in preparation for the family gathering on Thanksgiving Day—I discovered a cavern. This cavern was so deep, it required a flashlight to discern its depths and *shiver, shiver* ghastly contents. As the original occupants of this lovely home have returned to their Maker in years past, you need to know that I suspect no one has lurked in this “Bat Cave” for years. I don’t think the entrance has been broached in over three years, at least.

The task of cleaning the rest of the very large kitchen (which I’ve envied for nearly 40 years now) has fallen to me on various occasions, and I’ve done a fairly thorough job of it for the most part. After my MIL had brain surgery more than 11 years ago, now, the ladies hired to help with housework, cooking and looking after the in-laws (at least two of them) did a valiant job but had their hands full in the “taking care of” department in many instances which also included chauffeuring to doctor appointments, etc., etc. Hence, deep cleaning, serious deep cleaning of the ‘Bat Cave’ was over-looked. Perhaps it was even “off limits” as its contents were under the FIL’s jurisdiction and not to be trifled with.

So, after who knows how many months, years, of surface attention, if any at all, the Bat Cave and surrounding environs were finally thrust open to view. Now one fact you might need to keep in mind—which has gone unmentioned heretofore: this house containing this kitchen, containing this Bat Cave (convincingly disguised as a corner kitchen cabinet under the counter) is located in a farming area. Because it’s in a farming area there tend to be field mice that frequently seek shelter from life’s little difficulties where they can.

And also in the interest of full disclosure, when one of the women hired to clean house, etc., took little interest in the cleaning aspect, I discovered one weekend, that some rodents had apparently held some sporting events in this kitchen for some time and apparently considered the area behind the microwave oven as their outhouse. Sorry to alarm your sensitivities, but the truth sometimes is disgusting. That said, you may begin to understand why I began calling this particular corner kitchen cabinet under the counter as “The Bat Cave”. In the furthest reaches of the back of said cave, I found a treasure trove of guano—so to speak.

I’d wager no one had, in recent history, ever put light on the subject and found the heaps of “stuff” in the back corner—on both shelves. So, with a trusty flashlight and a long broom and mop I harvested a pile of poop. Dust filled the air in the small space and I coughed, sneezed and shivered through it all. I thought of calling in archaeologists to carbon date samples to determine the age, etc. of the pile, but didn’t want them traipsing around during the Holiday interrupting our family gathering. So, after a relatively good sweep, I sprayed the heck out of that cabinet with Clorox spray cleaner, and mopped my way through as best I could. Had I been able to really enter the cave a far as needed, I’d have done a far better job. The adjoining cabinets also received proper de-junking, spraying and mopping. Before all was said and done, my husband had taken several truck loads of garbage off to the dumpsters from our daily use of paper and plastic dinner ware and utensils, as well as what was cleaned out throughout the house.

Oh, and lest I forget…I caught one mouse in the laundry room closet the night I set out the trap. I suspect there are more lurking about, however, and will have to set out more traps next time I’m in the neighborhood.

One day, for Jeanie in Paradise, I may take better pictures of the very large, enviable kitchen I’d like to transplant to my own home. As you know, Jeanie invited us into her kitchen and I could possibly invite you into the one that’s now much cleaner than my own. Hmmm. Let me see. I could thumb through the pics we took at Thanksgiving . . . maybe . . . yes. Let’s try these on for size . . . 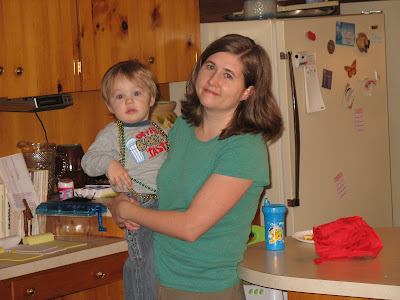 They are standing at the entrance from the den. 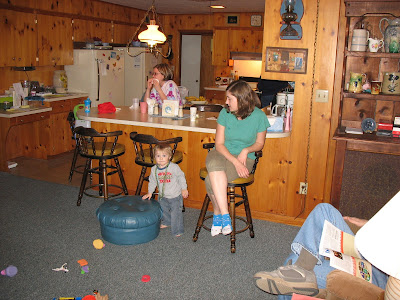 This is a better Den's eye view, if you will.

These are, from l to r, #1 daughter, Jana, little AFT, Amy, and the foot and legs of BIL, David, or Amy's hubby, Darren. Can't exactly tell from the shoe. Ooops! Yes I can! It's gotta be Darren! Look at the plant magazine in his lap! 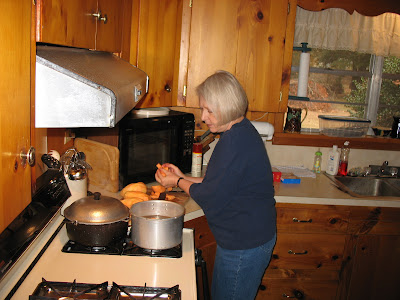 That mystery woman is chopping sweet potatoes and putting them in the pot to cook for Thanksgiving Dinner. (Ugh! She's the same woman who crawled into the "Bat Cave"!!! Yikes!)

This is one of the most important spots in the kitchen, it's the business end. Many a delicious, and great meal has been prepared here. My mother-in-law was a fabulous cook. She taught me lots about Southern Cooking. You can tell I learned a thing or two by checking out my profile! 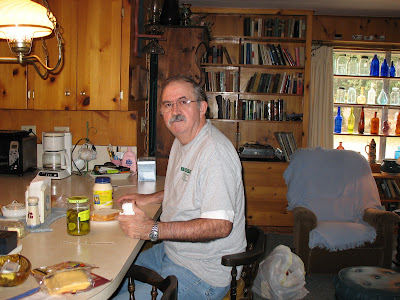 This charming Gent, who didn't want this picture taken (can you tell?) is my one and only!

This is the other important end of the kitchen--the one where most meals were/are eaten. 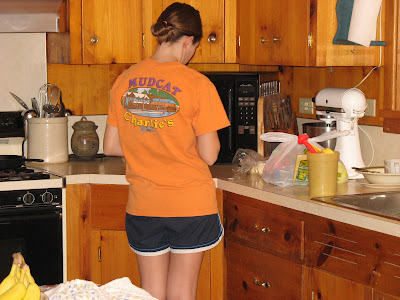 This lovely lady is #3 daughter, Sarah.

So, you didn't get to see EVERYTHING in this large, wonderful (clean, though you can't tell that for sure from these pictures) kitchen I wish were in my house. Except for the "Bat Cave" of course. Jeanie, do these picture count? And since you probably did notice . . . the kitchen is mostly part of the den. I really like that in a kitchen/den combo!

Don't you just LOVE your Kitchenaid mixer? I've got the same one!

And yes. The pictures count.

Absolutely!!! In fact, I've loved it for about 32 years! Only had to have it serviced once about 15 years ago. I just was a new and bigger one! Once upon a time, I made whole wheat bread to sell--ground the wheat even. It was good, but after that kind of beating (he, he) it had to go to the shop for repairs! ;-}

So, how long have you had yours, Debby?

Oh, I love it!! It truly looks like a kitchen good food comes out of (if we TOTALLY ignore the bat cave (esp the guan-oh) references).

I am also profoundly in love with those bookshelves.

My Mum still has her mix-master, which she must have got in the very early 70s because that is when we got electricity - on its second set of bowls now, but otherwise perfect.

Me, on the other hand - just unwrapped my fourth food processor - but for cakes and batters I use my trusty hand held electric beaters that my brother gave me as a cheap gift over 15 years ago.

Yes to the bookshelves! I never seem to have enough of those to go around! You know, there have been some comments in the family about my husband and me retiring to that house. His parents did build it. His dad has been given credit for doing much of the carpentry of cabinets and shelves, I think. And, my husband's mother was actually born on that plot of ground. Well, not "ON" the ground so much, but in another house her parents rented/owned/grandparents owned . . . don't recall the storyline on that for sure, but it does have lots of family history. AND it's large and has all those bookshelves and the huge kitchen and about an acre of grounds, 3--make that 2 1/2 out buildings. Okay. Lest I get carried away, I'll just stop there. Who knows where we'll be in the next five years!

Check out the WV citiali. Does that mean we'll be living in the alley of a city somewhere? Eeeeek!

I came over here because I loved the title of your blog. I'm so sorry about the guano...I detest mice.

Thank you, Lori. Glad to have you come by!