Tonight I'm really exhausted.  There's been the flu to deal with for a week--and a 6 lb loss for me.  Ugh.  I'm trying to calorie-up, but have to take it one day at a time.  Of course, I think I feel the need for and hear a bowl of chocolate ice cream calling my name.  I heard it earlier tonight and turned a deaf ear, but it is beginning to be insistent and I may just have to go hush it up in person, with spoon in hand!

Last couple of days we have had wet and warmer weather.  Tonight, I believe the weather is turning cooler--like maybe dipping JUST below the freezing mark around daybreak tomorrow and the rains are predicted to return.  Tomorrow night we're to expect lows in the mid to low 20's.  Fun.  I'll be sure to wrap up and pack warm clothes for the trip to Jackson, MS for the antique bottle show on Saturday.  I want to avoid health relapses, thank you!

The full moon was very cool looking this evening.  My husband said it looked to him a bit like a werewolf kind of moon the way the gray clouds seemed to scratch across its face.  He might have a point.  Where's my silver spike?  Or wolfbane?  Or good sense to not get too excited about mythological weirdos?

Must be the haunting call of chocolate ice cream once again.  Okay, by golly!  I'm coming.  NOW!
Posted by Pencil Writer at 9:12 PM 1 comment:

Time Waits for No Man. Or Me, Either.

I haven’t really been procrastinating.  Not really.  I’ve just been so busy with preparations for Christmas and all our children and grandchildren being together—you know:  cooking, cleaning, and cleaning, and cleaning, and rearranging furniture—including getting the baby crib and other necessaries from the storage unit, cleaning some more, decorating (albeit minimally), buying groceries, and buying groceries, etc., and planning the Christmas music for the Church Christmas program including choir practices and coordinating with those who are really in charge of the meeting schedule, planning and preparing Sunday School lessons, and did I mention purchasing Christmas gifts and wrapping same?, and occasionally breathing and refocusing.
Honestly, I thought of blogging every few days or so, particularly when I had a moment to squeeze in a look at my favorite blogs late in the evening.
And then, on Tuesday before Christmas, when I thought I had another day to clean and prepare—which I figured would MAYBE be just enough time to finally finish everything—I learned around noon that youngest daughter and her family were actually arriving a day early!!!  Which meant about 3 to 4 hours from that moment!!!!!!!  Never one to panic (yeah, right!) I shot into high gear and enlisted the aid of my two oldest grandkids, who were the only other bodies present, to do things they are not used to doing!  But, because cousin, Baby Cakes, was on her way . . . man!  They were all for the extra hard labor.  Blue Eyes couldn’t get enough of the vacuuming of stairs and entry hall, Miss Noodle vacuumed the living room (we employed dual (dueling vacuums?) vacuums—Noodle had the upright, and Blue Eyes had the shop vac.  It all worked great!)  I forget who vacuumed the dining room and kitchen, but Grandma scrubbed floors upstairs and down till the skin wore away on her old fingers!  (That’s the thing about doing extra cleaning, particularly with more cooking/baking—the mountains of extra dishwashing—and during cold weather, the skin on my fingers disintegrates something terrible!  Cracks form and hurt like the dickens, and whine, whine, whine!  Sorry.)  And, Miss Noodle folded clothes till she thought she’d collapse!  But all toil and trouble was forgotten when Baby Cakes and parents arrived a little before supper.  All hearts were then made merry.  According to the baby’s Mom, said Baby Cakes wailed for miles at the injustice of have spent so many confining hours in the tortuous grip of a car seat.  (Can’t they design a reasonable car seat for little ones that doesn’t make their little sit-me-downs go to sleep?  Seriously!)
Christmas was GREAT!  We did have all our children and grandchildren together for Christmas Eve night and Christmas Day for the FIRST TIME EVER!  I’m soooooooooo grateful for that!!! 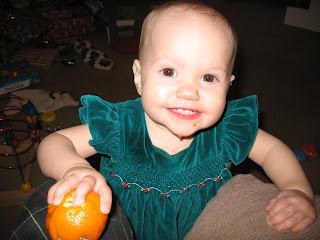 Someone discovered the GREATEST ball in the world!  It rolls very nicely, smells good and TASTES good! 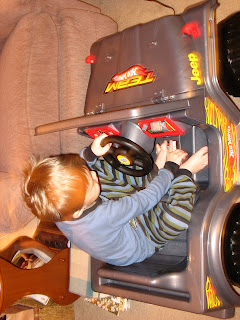 Santa somehow knew that this kid needed, really needed a car to sit in and drive.  For REAL! 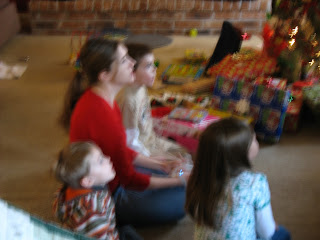 Uh, oh!  Thought that pic was a better one.  But Wii is mesmerizing, nonetheless!  For #2 Daughter and her precious brood!
SIL, Baby Cakes' papa loved playing Mario something or the other along with (my) Young Son, too! 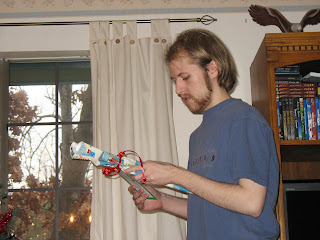 Young Son on doling out the Christmas gifts duty. 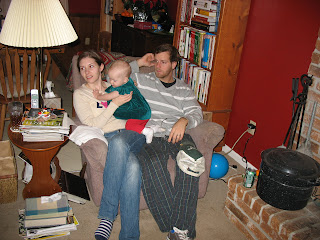 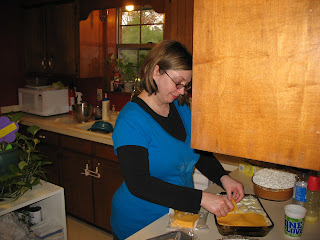 Oldest Daughter finishing up the asparagus casserole.  Yum!  (There's a sweet potato casserole just about ready for the oven close by.  More YUM!) 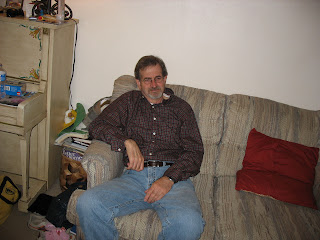 My Borther-in-Law.
(I don't ever remember seeing him look more like his brother, my husband, than in this picture!)
The day after Christmas, #2 Daughter and her father (my husband—just so no one gets confused) drove half the distance for her children to meet their Dad for his week with them.  Our son had work on Monday, so before husband and daughter made it back home, I drove him to his home.
Once there were eleven and then there were seven.  But we were not idle.  Son-in-law took the time--and there were some complications, of course, because nothing like that is going to go along seamlessly--to install my Christmas present, a new dishwasher.  He also managed to uninstall the garbage disposal that has been inoperative for years and therefore taking up unnecessary space under my sink.  (The first task, of course, did entail the removal of the OLD dishwasher.)  I can’t tell you how grateful I am for his help in those two tasks that require not only brawn but, quite frankly, a lot of brain as well.
His wife, #3 daughter, made a fabulous pot of chicken and dumplings—her own variation of my version of my mother-in-law’s take off of her mother’s rendition of her own mother’s chicken and dumplings recipe.  We all lapped it up with gusto!  And, for me, because I requested it before she ever left home to come this way, she made her great apple pie!  I truly savored every bite—and wish for more.
On New Year’s Eve Eve, we celebrated oldest daughter’s birthday (a day early) with middle daughter’s Pork Adobo Tacos, my guacamole and pico de gallo, and I don’t remember all the rest, other than grated cheese, sour cream, chopped cilantro and chopped green onions to adorn the other stuff.
Then oldest and youngest daughters, Son In Law, and I played “Settlers of Catan” on New Year’s Eve to welcome in 2011.  It was fun—even if I did the worst of all players, but it was touch and go for the rest of the players throughout the game, and Birthday Girl took grand prize!  We had my homemade cinnamon rolls for her “birthday cake” (she’s NEVER been a great cake fan) the next day.
We had a great spread on Christmas (just to keep you guessing as to the time line—there isn’t one. (Obviously)) Tangenting back now:  Youngest daughter, SIL and Baby Cakes left us on New Year’s Eve, sniffle, sniffle.  They’re over 700 miles away—which is way too far!  The other grandchildren are back from their week with their Dad and their other grandma where they had a second dose of Christmas.  And school has begun once more.
I think I began typing this post up two weeks ago.  Since much has occurred in the mean time, I’ve apparently not posted it before today, so I’ll do that now and catch you up (or me up?  Hmmmmm???) a little later on what’s happened since.
Maybe.  * * * SMILING * * *
(ThIs wHolE tHinG miGht NoT maKe eNny sEnse.  BuT ThEn, yOu migHt HaVe fiGureD iT/tHaT ouT.)
Posted by Pencil Writer at 12:01 AM No comments: