It's late. I've checked on my blog friends to see what they're up to. Didn't comment. But had pleasant visits catching up. I haven't exactly been hiding. Just overwhelmed with everything going on. Husband's still having some health issues. Don't know if they're related to the heart meds and/or implanted computer to keep his ticker ticking. Who knows?

But we have two daughters coming. In the next few days. One is bringing three very young and lively children ages 2, 4, and almost 6. The other is bringing one--expected to arrive on my birthday in January! It will be great to have all 4 children "home" once again for a while.

HOWEVER . . . I've been cleaning house like a mad woman. I've let things build up over sixty-leventy days, weeks, months, something like that--some of the stuff to be dealt with belongs to the four lovely offspring mentioned above. (Two live pretty close by.) So, I'm trying to unload what I can of theirs on them--though it seems they have little space to accommodate--less than we do???

I've seriously been de-junking, which means rediscovering sweet memories, finding (lost) misplaced items of necessity, tons of yarn and fabric just waiting for artistic and utilitarian projects to begin, and I have not time to describe it all.

Suffice it to say, I'm under the gun, and about half-way . . . maybe . . . done with the whole job. I'd really like to paint walls after the super cleaning that needs to take place after de-junking, but well . . . only if super woman flies through a window tomorrow morning, or perhaps a Harry Potter and/or Hermione with magic wands in hand appear, or perhaps the combined efforts of all the aforementioned characters . . . not to mention the need for several more bookcases to materialize, and shelves downstairs to house various craft items, including boxes and boxes of school paper, crayons, colored pencils, folders, etc., etc.

As an aside: My husband has accompanied me on several occasions when shopping for artistic tools and supplies. He's seen the glazed look of adoration and wonder that transforms my face into a trance of sorts. And he's said, "Why don't we just buy the store?"

I looked stupefied and asked, "Really? Why?"

"Because then you'd have all the sewing, crocheting, embroidery, paints, brushes, papers, cake decorating and everything else kind of supplies handy."

"Well, yeah. And, then you'd know where everything was and maybe, just maybe, we could sell some of it--to finance the rest."

I love my husband. He actually understood my fascination with craft stores. But then, I have a thing for hardware stores, too. Especially the really old ones. I could get lost daydreaming in places like that for weeks. I love tools, and bolts and screws and nails, pliers, screwdrivers, hammers. I better stop tangent-ing--that's what gets me in the trouble I'm in.

So . . . we're not quite done with doctors. I'm not quite done with house cleaning, re-arranging, and I've just begun on a ton of new Church callings which will tax my fledgling talents--if there are some there--to make it all work. Maybe I'll find a minute or two next month to update. Here's hoping. But, now, I'm getting ready to go to sleep.

Maybe that's why I'm so tired lately. And, NOT hiding.
Posted by Pencil Writer at 10:29 PM 3 comments:

Addendum: And at the beginning . . . or second beginning.
My dear sister, Janet, was so sweet to email these pictures so that I could share them with you! She pointed out that the wire the nests are built on, actually provides power for her patio lights. And if you look REALLY closely, you'll see that the nest located near the center of the photo is built directly atop a switch--which can't be much more than an inch long. So, we're talking minuscule nest, here.

She further explained that the nest to the right side of (most of) the pictures is actually one from a couple of years ago. That one, according to her report, contained two little eggs approximately the size of little almonds (shelled almonds, I'm sure). I'm impressed. I've always wanted to see a hummingbird nest close-up and this might be the only chance I get to do that! (She lives like a two-day trip from me--a LONG two days! Dang it!) 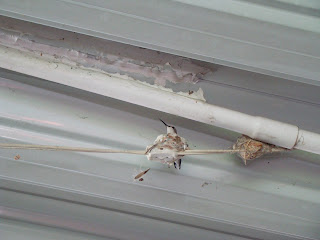 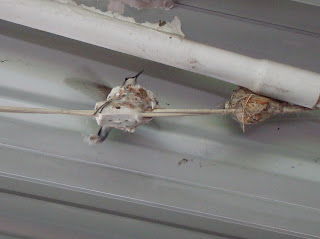 Notice the rapidly moving wings up there? 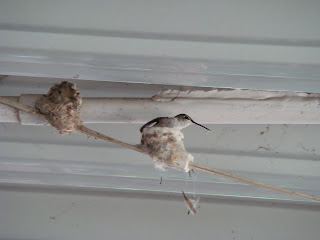 See the switch the nest is built on? 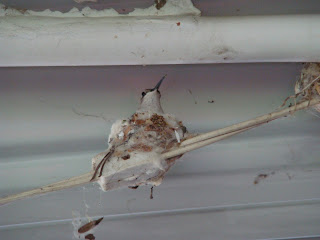 Isn't this just sweet?!!
* * * * * *
I have a sister who took a picture of a hummingbird on its nest. It's under the patio cover at her house. The nest was constructed on an electrical wire, of all things, and she, my sister, now has limited access to her patio (the nest is really close, she said, to her access door). The little jewel's chosen spot is just over the BBQ grill, so grilling, for a bit, will be curtailed.

I've got to see if she'll email me a copy her picture and post it. It's just so cute! And who doesn't need "cute" right now in this world? So, IF she'll email me a copy of her great picture, I'll share it with you. (She did, as you might have noticed at the beginning, the new beginning of this post.) Otherwise, you'll have to be like I was yesterday, and be completely oblivious to what a hummingbird on its nest looks like. (Unless, of course, you've already been so privileged.)

Best to you all, and to all little, glittery hummers wherever you are! (Not the rugged 4-wheeler version vehicles. Rather, the high-energy, feathered, acrobatic masters of flight ones!)
Posted by Pencil Writer at 12:33 PM 4 comments: