Well, maybe NOT evil altogether . . . I'm talking Rice Krispie Treats here.  I don't make them very often because, well, I'm addicted to them.  I can handle my addiction pretty well, too.  As long as I'm not within 50 yards of homemade rice krispie treats that are made with extra butter and marshmallows.

Wellllllllllllllllllllllllllllllllll . . . today I needed to spend some special time--just grandma and Blue Eyes time--with the 5 year-old grandson.  The one who LOVES to cook and help in the kitchen.  I was toying with the idea of making the Evil Things after finding an extra bag of mini-marshmallows and seeing that we had two large boxes of rice krispies as well.  But, I thought . . . I'm considering buying a bathing suit for the first time in about 20 years.  And even though I lost a bunch of weight and went down a size or two a while back--and  even though, or especially because the scales have recently started intimating that some of the previously lost weight is beginning to sneak back into residence where it's most unwanted and unnecessary, I'll be strong and NOT muddle things up by making the Evil Things!

I was feeling pretty good about that very positive decision to be strong and unyielding to the terrific temptation  tantalizing as it was . . . UNTIL . . . my daughter said something to the effect of:  "You know when you were thinking of what you could do with Blue Eyes today after school?  You could let him help you make Rice Krispie Treats, couldn't you?"  Dang!!!!  When someone else has the same idea I do, I kind of figure it's a positive thing.

Well, it was, for my precious grandson who's been having a bit of a rough go with a variety of challenges lately, so he needed something fun and positive to do.  It seemed that he had a great time helping me through all the steps of making those blasted treats.

I have to admit I regret every bite I've enjoyed so far.  I just try to NOT look down at my bulging middle that will look pretty ridiculous in some of those bathing suits I've contemplated purchasing in the near future.
Posted by Pencil Writer at 7:27 PM 2 comments:

Our family went to Fort Jesup this past Saturday.  It was a beautiful day to be outside.  This fort is now part of the Louisiana State Park system as a State Historic Site.  There are a couple of others that I know about in the area:  Los Adaes, a Spanish fort built in 1700s (and at one time the capitol of Texas), and Fort St. Jean Baptiste, a French fort built in 1716.  I have visited each of them at least once and found them very interesting.  I can't help but love history.

Borrowing from one of the brochures (published by the State of Louisiana, Department of Culture, Recreation and Tourism, Office of State Parks) I picked up last weekend I'll quote some of the data therein:

"When the Louisiana Purchase Treaty of 1803 failed to clearly define the western boundary of Louisiana, which was also the western border of the country at that time, the United Stated claimed eastern Texas and Spain claimed western Louisiana.  The ensuing dispute gave rise to the 'Neutral Ground,' an area where the laws of neither nation were enforced.  Soldiers and settlers were kept out and rouges of various stripes ruled the region.  After the territorial boundary was finally fixed at the Sabine River by the Florida Purchase Treaty of 1819, the United States built Fort Jesup in 1822."

According to the information I have on hand and what we were told this past Saturday when the family went for "Settler's Day, there is only one original building still on site--the kitchen/mess hall. (I think about 80 buildings made up the fort in its prime.) There was a young lady (in period costume) actually cooking inside that kitchen on an open fire  while explaining the chores of feeding the soldiers at that time.  She was very informative in explaining how it all was done.  The cook would feed the men in groups of 25 at a time, which sounded like the cook would have been working several hours just for breakfast and then several more for the noon meal and, well, supper?  (Please see pictures 4 and 5 below that show a little girl holding a lizard she was thrilled with catching in the woodpile next to the kitchen steps.)  I wasn't able to stay through the whole discourse because:   a.  the smoke was getting to me,  and b. the grandkids were running amok.  Or actually, Little Britches was pretty much running amok and I needed to catch him and ride herd on him. 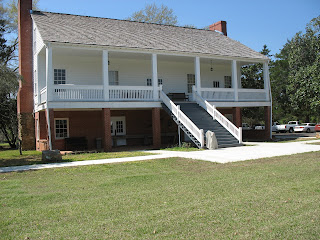 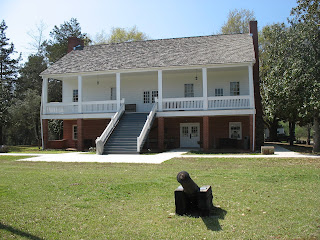 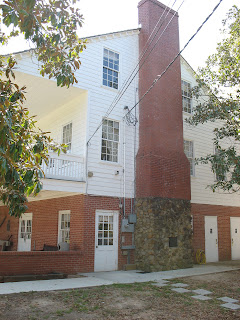 The reconstructed Officers Quarters (pictures above) was built sometime after 1961, I think.  According to the same brochure quoted above, "This building was reconstructed with the assistance of historians from the Army Quartermaster General's Office and the National Trust for Historic Preservation."  (It reminds me very much of a similar building in Fort Laramie, Wyoming, that I saw about 35 years ago.)

I love history, and since I was raised as a Army brat, it has more interest for me.  The fort was abandoned in 1846, but for a time it was the western-most US military post in the country.

Some of what we saw while at the Fort: 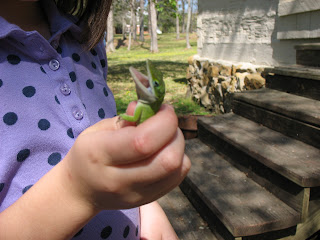 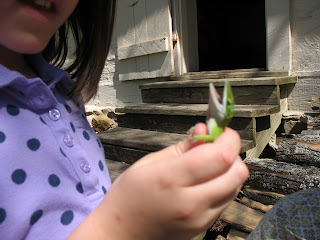 The back steps of the kitchen are backdrop for the display of wildlife captured by Miss Noodle. 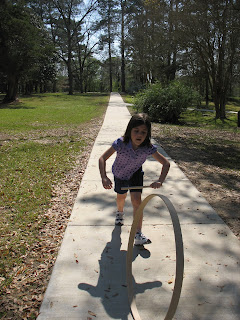 She found keeping the hoop rolling was not as easy as she first thought, but did catch on pretty well. 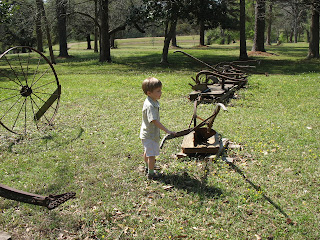 Little Britches inspecting some old plows.  We talked about hitching mules to pull the plows, but I don't think he caught the concept! 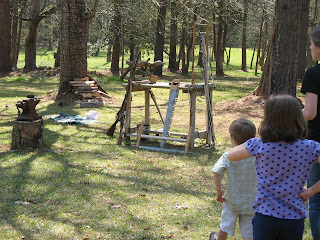 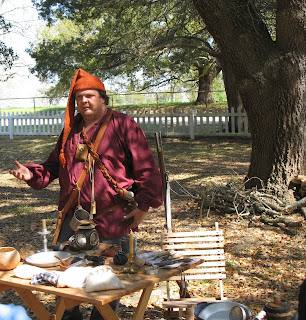 This guy in costume demonstrated how they started fires with flint.  It was really cool to see it done! 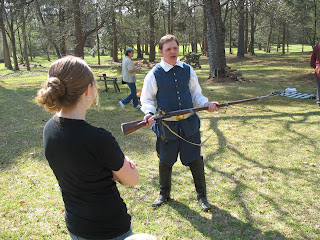 The young lady in black shirt is my daughter.  The guy demonstrating this old black powder rifle and she used to work at the same grocery store once long ago . . .  He's wearing a period Army uniform. 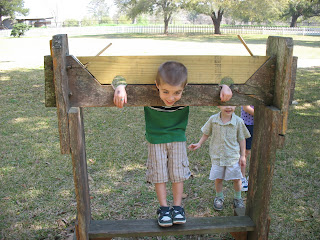 Blue Eyes was quite excited to try out the stocks.  We did try to explain how they really weren't all that fun for folks who actually were punished in those contraptions. 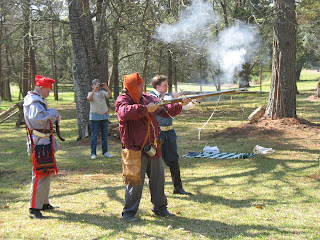 These guys demonstrated black powder guns in action!  I know the young man in the Army uniform said he actually hunts with his own gun of that old vintage--though not an antique.
The grandkids want to return to Fort Jesup.  I think we bigger kids do, too!  Not to mention visiting the other two historical sites mentioned above!
Posted by Pencil Writer at 11:06 PM No comments:

Not me!!!!  But, yes.  My daughter who just celebrated another birthday yesterday, who "won" a pecan pie at our Relief Society Birthday party (Relief Society was founded on 17 March 1842, actually for the women of the Church), decided that since she had a mid-term test this morning and needed extra "brain power", and since she informed me that brains are fueled only by sugar (I suppose you could look it up if you/re so inclined) she indulged herself with scrambled eggs and pecan pie for breakfast.  "Mom, this pie is DELICIOUS!  I'm so glad I won this last night!"  As it was her birthday yesterday, I'm sure it was only right that she "win" the big prize.

I should have taken her picture as she ate, but I was in need of some brain fuel myself, so I can't share her smile of satisfaction as she consumed the treasured prize.

If I were going to eat pie for breakfast--and don't think that I haven't!--it would most definitely be apple pie for me.  Or as it was once upon a time, Litzas Pizza's Canadian Bacon and Mushroom pizza pie.  (That was what it was called back in olden times.  Pizza Pie.)  Cold.  Yep.  Cold.  It was so good I think I walked a mile, since I didn't own a vehicle, to buy a large pizza so I could eat leftovers it was so good!  (I was living alone in Salt Lake City shortly after graduating from high school and walked everywhere!  I was in much better shape then than now, too!)

Any way, IF you were to eat pie for breakfast, what kind of pie would you eat?
Posted by Pencil Writer at 9:53 AM No comments:

Today my two grandsons had some minor, outpatient surgery.  The youngest was first on the list to go to the OR.  (Youngest first, seems always to be the rule--and I think rightly so.)  They gave him a dose of "drowsy" medication which didn't seem to quick to take effect, but did seem to be working.

His mother and I knew for sure he was "under the influence" when she asked:

We both cracked up.

(He wasn't quite so mellow when all the "deeper sleep inducing" meds began wearing off.  But then, that does happen sometimes.  Ever see an angry bull?  Or little bull?)

Back at home this afternoon while older brother lamented his pain and anguish, Little Britches encouraged his mother . . . "Hey, let's play tackle."  (The bull was beginning to show his colors again!)
Posted by Pencil Writer at 9:48 PM 3 comments:

I've been expecting it for at least a week.  Been checking every now and then without any hard evidence.  Saw the moths.  Checked the thermometer outside.  It was 62 degrees.  And then, at 9:15 PM this evening, after washing up yet another batch of dirty dishes . . .

I saw one!  Just at the edge of the kitchen window.  Yes, sir.  A gecko!  A gecko with his eye on a big, juicy looking moth.

Labels: wildlife near the city

"Spring has sprung, the grass is riz, I wonder where the birdies is?"
Well, flocks of them are dining at our backyard eating facility, and apparently texting their friends and family members to join in.

Today was a GLORIOUS spring day!  Temperature hovered around 70.  Sun was out.  Breeze was anticipating March's entry with a fresh display of playfulness.  Trees are blooming all around us.  Lizards are sunning and playing hide-and-seek.  Robbins, starlings, nuthatches, sparrows, cardinals, bluejays, mocking birds, pine siskins, woodpeckers and I don't know what all else are busy!  And hungry!

The grandkids are rollicking and frolicking about in the yard picking wild flowers, kicking over active fire ant nests, checking out the "rollypollies" (wood lice), lizards, etc., etc.  And getting filthy in the dirt and thoroughly enjoying themselves in the process.  Yesterday afternoon I sat in the sunshine and very breezy afternoon and enjoyed listening to and watching their antics as they enjoyed themselves.  It was just plane lovely!  I do so love Spring!
Posted by Pencil Writer at 12:19 AM 5 comments: